As we drove up the dirt road up to Kralanh Referral Hospital near Siem Reap, I recognized the lines of people wearing white-gauze eye patches. I had seen many in the days leading up to this during pre-op evaluations. Most of the patients stayed the night at the Hospital due to the distance traveled to receive care. They arrived with plastic bags filled with their daily needs, food and clothing. Despite how little they had brought with them, the patients were incredibly generous, welcoming and caring to one another. Unfortunately, there were not enough cots available, not even for all the children and elderly patients. Most patients slept under the stars in the corridors, porches and gardens of the Hospital. It was nearly 7:30 AM and today is the 1 day post-op patch removals! I can only imagine how anxious and scared the people must be feeling as they waited. 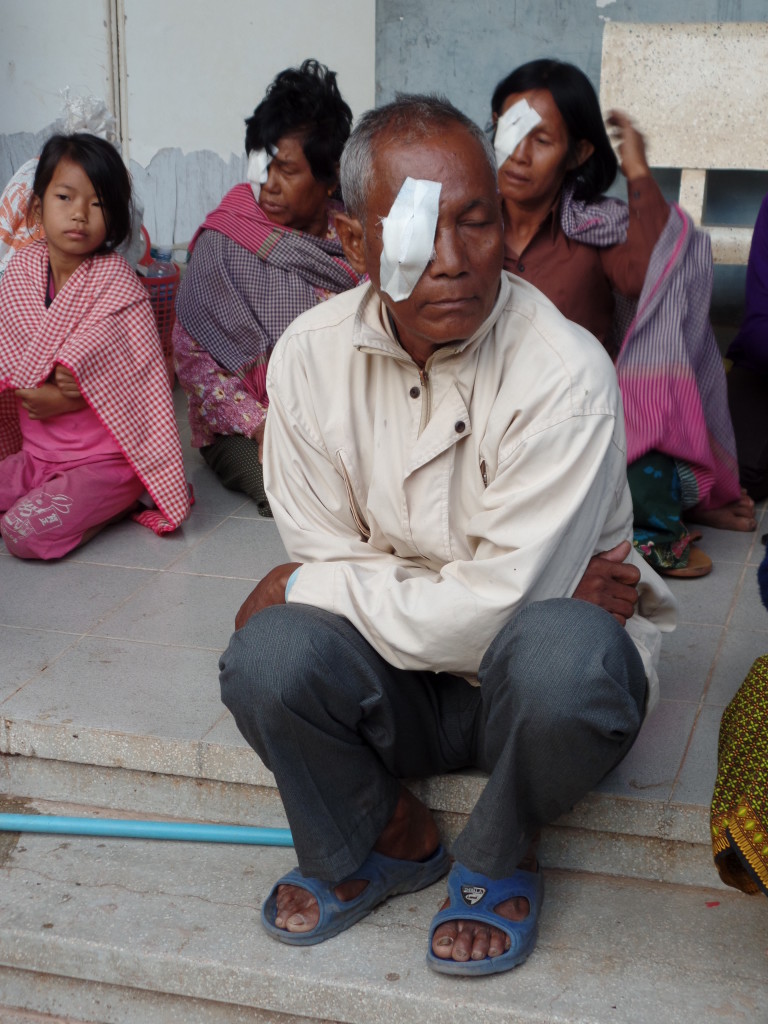 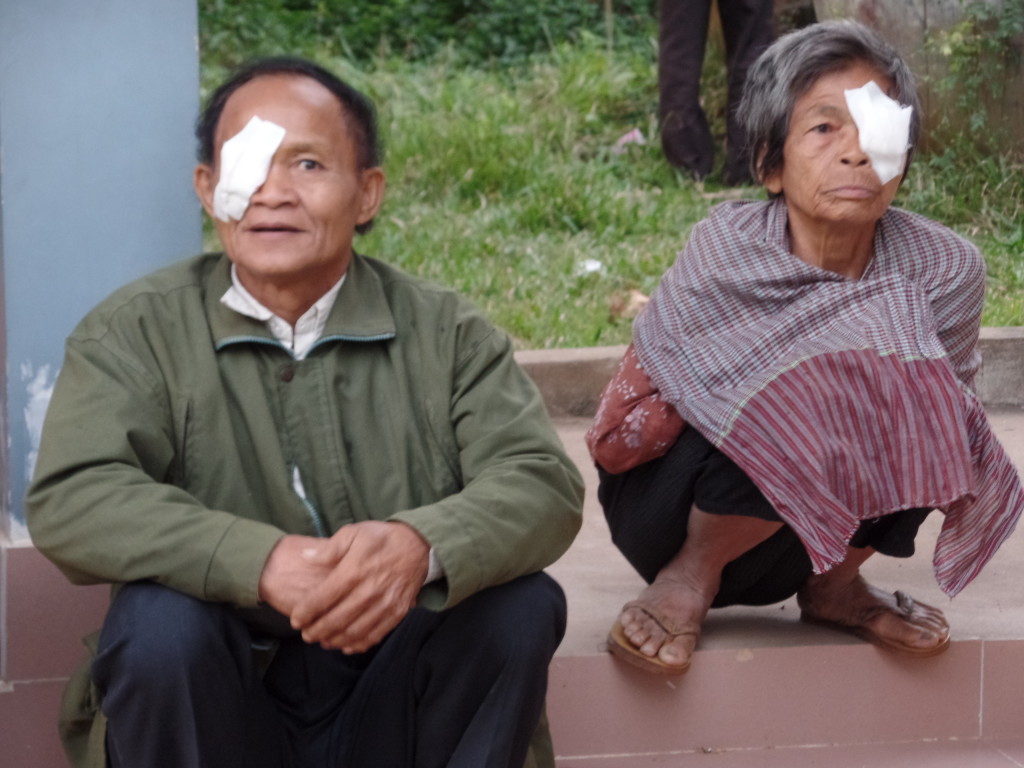 The SEVA Foundation is unique in the outreach and transportation work they provide. Much of the sight restoring work is offered and performed in remote regions where communication and transportation infrastructures are limited. The SEVA Foundation hires and trains Cambodian outreach workers to go out into the communities surrounding eye camps and referral hospitals to perform evaluations and provide surgical recommendations. This program creates new opportunities for employment, creates access to services and improves awareness of treatment options. Once patients are screened in their home towns, SEVA sends a van, usually the following day, to provide free transportation for patients to the referral hospital and eye camps. 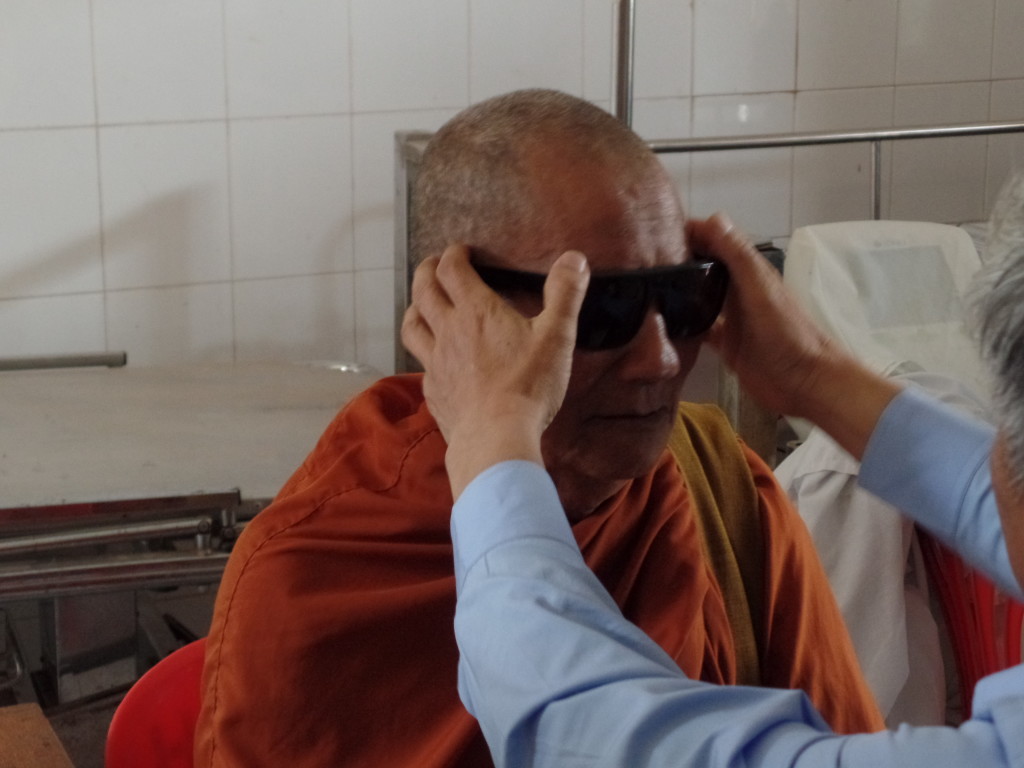 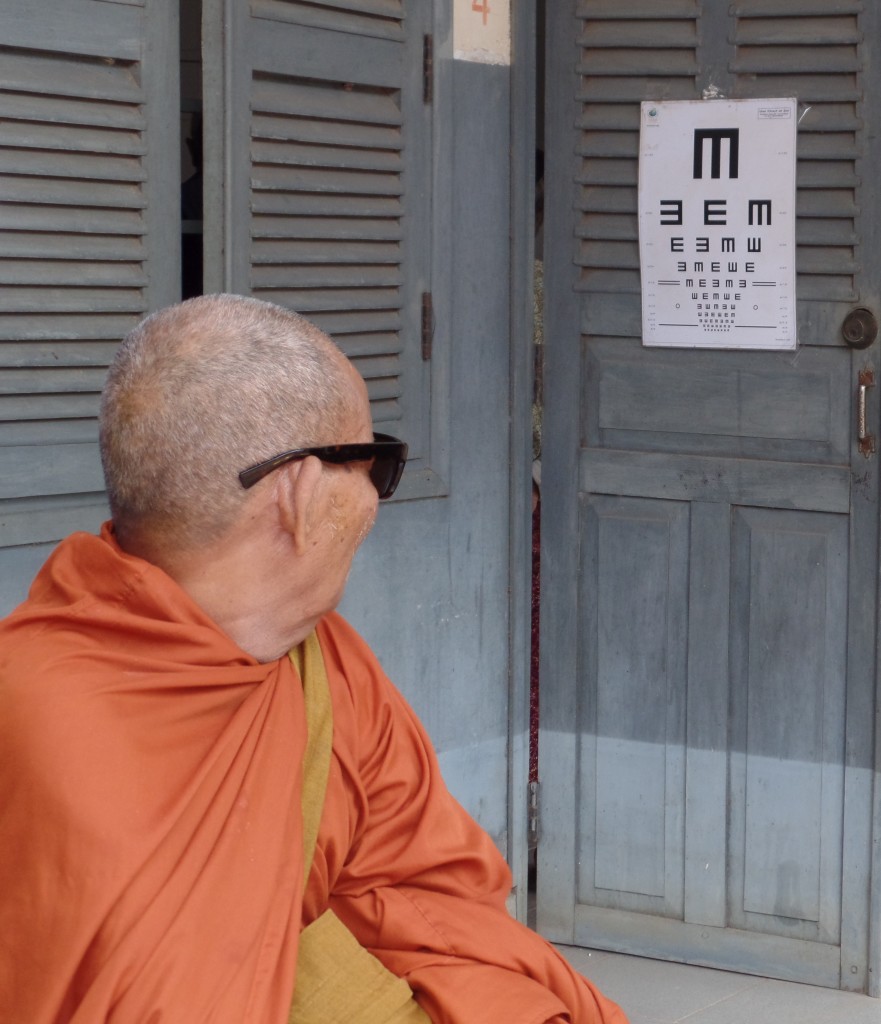 It’s overwhelming to hear how long some of these people have lived, only seeing bits of light due their dense cataract. The stories are heart wrenching and one I can relate to closely. My grandmother in Thailand went blind due to cataracts. This trip has touched a special place in my heart. The patients are scared but willing to trust us and that is something that is deeply meaningful.

There was one person in particular who tugged at my heart strings. Her name is Seng Phal. Seng is 80 years old and accompanied by her 48 year old daughter in law, Path Phop. They traveled to Kralanh Hospital to have her bilateral cataract and bilateral pterygium (white tissue growth extending to the cornea that can obscure vision) surgeries. This means that Seng had one cataract in each eye as well as a pterygium in each eye. Seng has barely seen bits of light for the past year and a half. She has been afraid to walk on her own since she lost her vision. Much like my grandmother, Seng’s movement declined and she required total care. Path has been carrying her in her arms from place to place ever since. They live in a two story home and 48 year old Path cradles Seng in her arms and carries her up the flight of stairs several times a day. The day before, Path carried her into the operating theater and held a finger to her mother-in-law’s hand during the operation, as a soft reminder she wasn’t alone. After the surgery was complete, Path lifted her off the operating table and carried her to the post-op room. This selfless act touched me more than I can explain. At that moment, I realized the enormous impact these surgeries will have on Seng and Path and their entire family. Restoring Seng’s vision will give her the confidence to walk on her own again, cook, write and SEE! Not only will Seng have a new independence but Path will too. 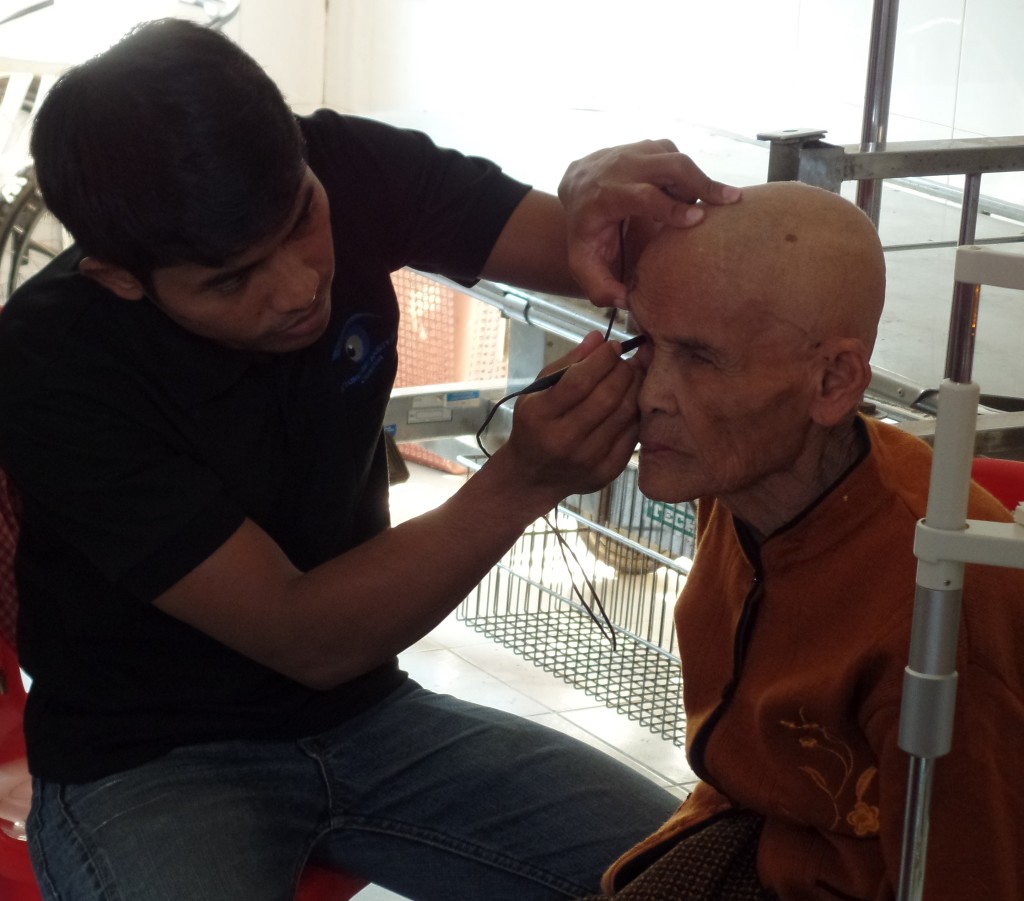 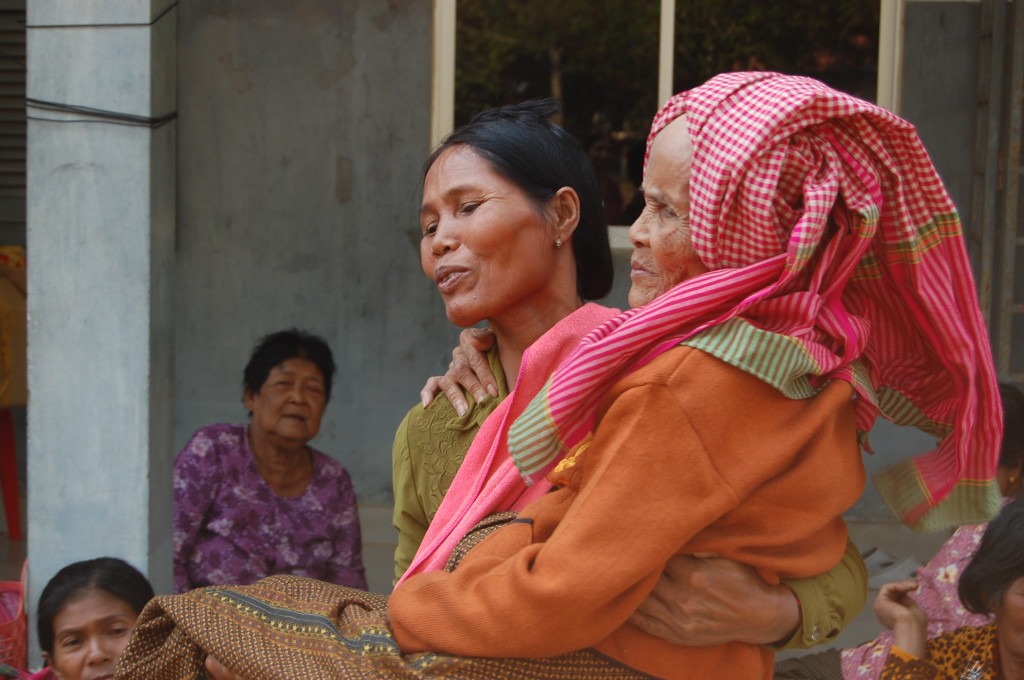 I forgot how much Cambodia has gone through since the 1979 Khmer Rouge Genocide ended. We glossed over the Khmer Rouge atrocities in high school. It wasn’t until we began learning about the SEVA Foundation and their work that I began investigating the history of Cambodia and what these people had been through. Almost everyone we met had been affected by the Khmer Rouge. Whether it was the loss of a family member, surviving a concentration camp or hearing stories from their parents, they had all experienced a deep tragedy. In spite of this horrific past, the Cambodians were still filled with laughter, wore smiles and expressed a sincere care for one another and even us, who were complete strangers.

The moment the patches come off is something I will always cherish. Dr. Tenzing began by giving us a recap of the surgeries, outcomes and estimates for future surgeries. While these surgeries are generally very successful, many of these patients have a lot going on and will need additional surgeries or corrective eyewear. Seng will receive at least two more surgeries and Path will have her pterygium operated on as well. Path wanted to make sure she could care for Seng before undergoing her own corrective surgery. They completed roughly 38 surgeries and were very encouraged by the outcomes. Jack Blanks, Executive Director of SEVA, brought out several huge bags of sunglasses donated by MODO Eyewear. We gathered the patients sitting with their families, friends new and old and began organizing the removal process. The smiles were growing and the anticipation was palpable. 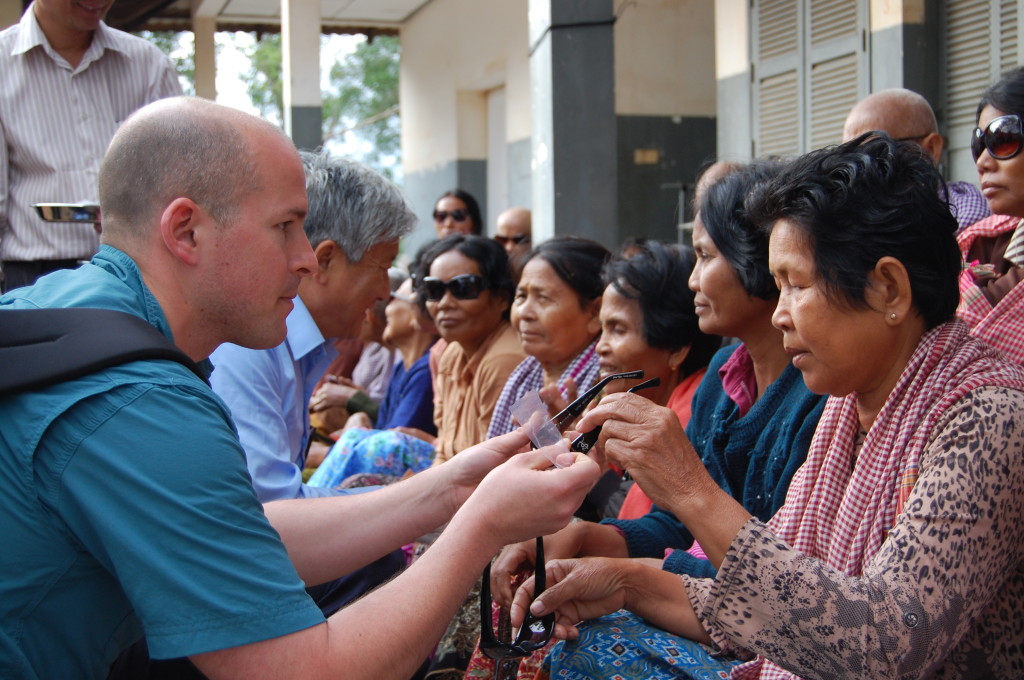 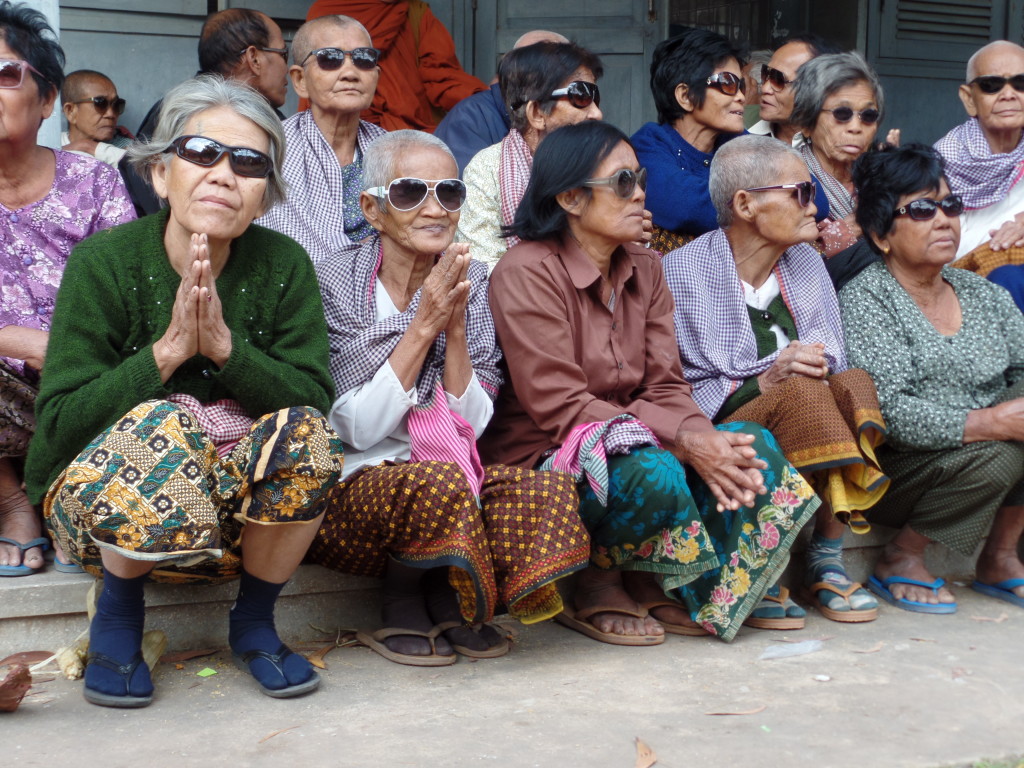 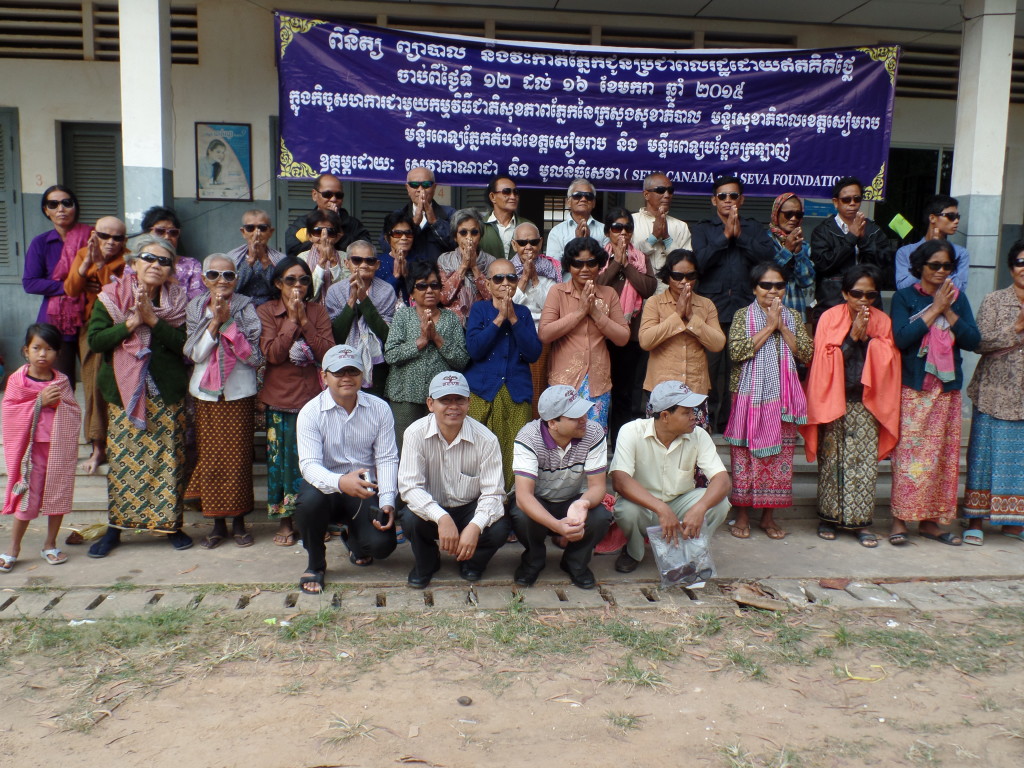 As Dr. Tenzing began removing patches, we began fitting the patients with sunglasses. More and more patients began smiling, blinking and looking around. As they found new focus, the laughter and chatter heightened. They all began pressing their hands together “Achun Churan”, which is Thank You So Much in Khmer. During one patch removal, Brian was working with two elderly sisters, and as their patches were removed they began pointing, talking and giggling. I wasn’t sure if it was Brian’s bald white head or what, but they were having a good giggle. The patients who hadn’t had their patches removed began moving closer to Dr. Tenzing as the excitement grew. We had to move faster, these people wanted to see. The removal process finished up and we adjusted the frames with nose pads and tried to fit the acetate frames as best we could. I have a short nasal bridge so I understand how hard it can be to find an acetate frame that fits properly. As we styled patients, some began testing their vision with and without the sunglasses. They were finding that it wasn’t in the sunglasses. It is incredibly gratifying and rewarding to have helped these people. Their appreciative and hospitable good-nature impressed upon me again the importance and purpose of this work.

About the Author: Brian